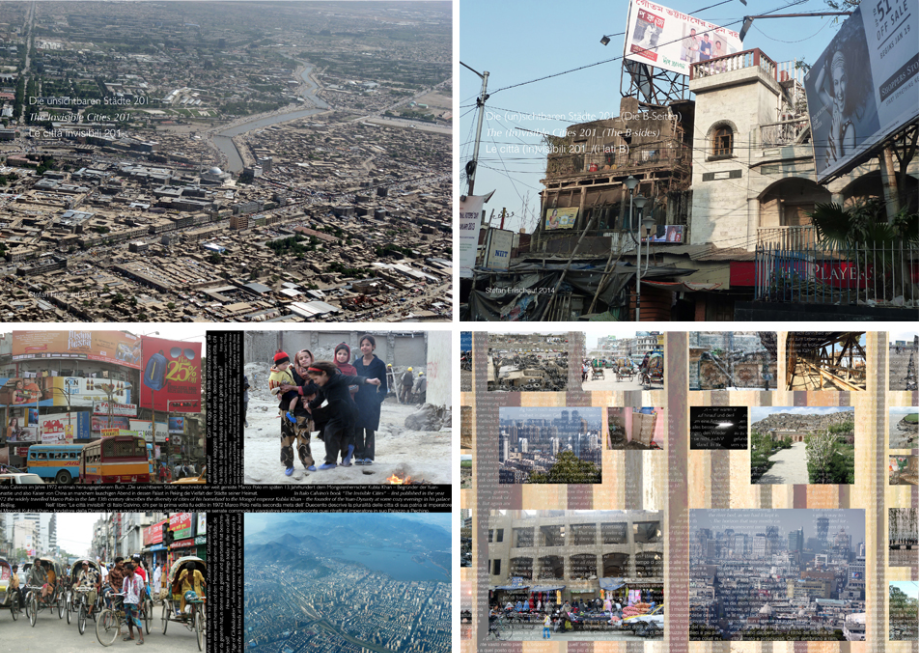 is a photo-documentation in two volumes and proceeds a literary concept, , which was developed in 1972 by the Italian writer Italo Calvino in photo and image description. Calvino’s fictional text  “The Invisible Cities” is divided into 55 short narrations, Marco Polo once represented to the Kublai Khan, China’s emperor at his court in Beijing. Therein the Venetian traveller describes the empire’s cities, named with beautiful female names in pictorial poetic – metaphysically deep portraits to the Mongolian emperor.

Covers above: View from the City walls downwards on Kabul’s Old Town with the river of the same name (A) - Calcutta / Kolkata – bright and dark – clear polished and matt dirty rough surfaces – the provisory and the solid, the improvised and the continuous besides and above one another in the “Global City” (B).

were finished in May 2013. Here there are 13 times 7 = 91 full-page photos. The corresponding, partly quite elaborated image descriptions characterize these real cities. Often though you will find something alienating at places, you might feel confidential with and at strange places you might find things, you didn’t expect there at all – things, which soon might let you feel more familiar with the place and its people.

At any one time there are 7 photos from 13 cities – ranging from “The City of Concreted Air Bubbles and Lost Freedom from Debt” via the “City of the Illusive Daydream” and “The City fragmented into thousand and one piece”, “The City of Nightmare Like Beauty”, “The Bustling Frantic City”, “The City of the Elements of the Rural Village – of Clean Air and Clear Water Flowing around Barefoot Dancers Playful Feet” up to “The City of Coulisses Displaying a Beautiful Appearance and the even though more Beautiful Being and Becoming”. Those photos were taken in 2008 till 2013 in several Asian and European – and one US city. The view of the person here activating the camera’s release therein is the view of the architect and urban developer, who above all also regards the city perspective structural socio-economic and urban and building historical considerations and – he doesn’t claim any photographic perfection.

The photos have been taken at Kabul, Herat and Bamiyan in Afghanistan; Hangzhou – that city, Marco Polo at that time called “the most beautiful town in the world” and – in fact it also has been the biggest town of the world besides Bagdad then - Shanghai,  Beijing and Kunming in China; Dhaka and Feni in Bangladesh and Delhi, Calcutta / Kolkata, Jaipur, Pondicherry and Bombay / Mumbai in India and San Francisco in the US – Palermo in Italy - Dortmund, Essen and Düsseldorf – the hometown of the “snapshooter” here in Germany.

were finished in January 2014. Here I assigned to the 13 times 7 = 91 full-page photos of the A-sides the corresponding “B-sides”. The central question then staying unresolved here as well once more is, whether we’re moving towards “The Triumph of the City” – as urban economist and Harvard teacher Edward Glaeser says – or – if we’re rather on our way towards the “Planet of Slums” – as urban sociologist Mike Davis teaching in Los Angeles proposes – referring to the great UN-Habitat-survey from 2003 and many other sources.

The answer on that will be given to us from many of those happy-go-lucky people struggling for survival – not only at these places displayed here – and hopefully us with them.

To these “Bon vivants”, these “hedonist masters of the art of living” on the “Planet of Slums” – no matter which social and ethnic origin they share but – who at the end of the day also have the potentials for bit by bit arriving at “The Triumph of the City” – a city, whose singular fragments then also warrant dignified space and appropriate time for all of us – joint with a well balanced relationship with the countryside and the village-like agricultural life this book then also shall be dedicated.

The photos have once more been taken at Kabul, Herat, Mazar-e-Sharif and Bamiyan in Afghanistan; Hangzhou, Shanghai, Beijing and Kunming in China; Dhaka and Feni in Bangladesh and Delhi, Calcutta / Kolkata, Jaipur, Pondicherry and Bombay / Mumbai in India and San Francisco in the US – Palermo in Italy - Dortmund, Essen, Düsseldorf, Cologne, Potsdam and Berlin in Germany.

The B-sides are completely edited in my “old” blog in the internet – here the preliminary words. The images with the trilingual image descriptions – German, English, Italian texts / image descriptions you’ll find by scrolling downwards and clicking on the red button „VORIGER EINTRAG“.