The central main space is used by Muslims on Friday and will be “played” for their common prayer, on Saturday then it serves the Jews for their Sabbat, on Sunday then Christians can celebrate their holy mass and church service.

As a matter of course there are always exceptions to be dealt out consistently – for example, when the Jewish community wants to celebrate Shabbat on Friday evening after sunset not at home but in a bigger frame together etc.

Ornaments and setting of the three rooms shall highlight the common roots and typologies  - similar to the Euro-Banknotes. Blooming periods always only took place, when common ground between the different cultures was worked out – when people were aware of differences, but were aiming at respecting their counterpart and at accepting his or her origin, experience and  knowledge as enrichment. This always becomes manifest in building – in the building history of monumental as much as secular buildings.

Evidently here it’s going further with the challenge, actually truly initiating a planning and building process of that kind. 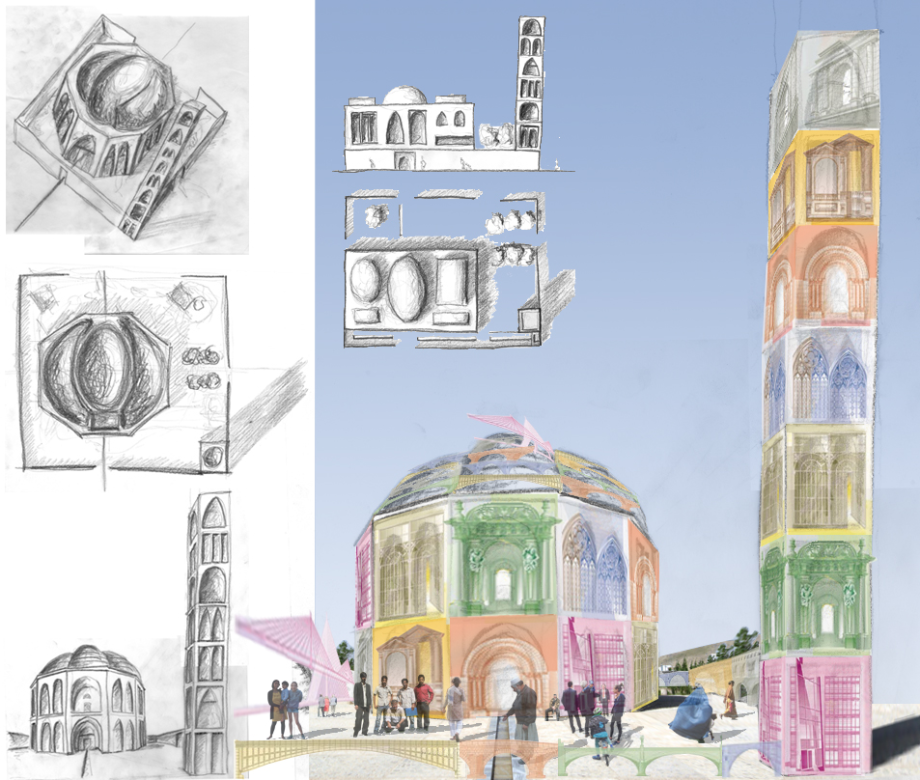 Here as much as at the Schools for International and Inter-Cultural development Collaboration (S I n I C C o l) the basics for a “public discussion” – and soon then perhaps even for an open competitive bidding shall be laid out.

Nonetheless courageous donors / investors, cities and communities – but also users – in this case committed ecclesiastics – Rabbis, Imams and Priests as much as citizen’s initiatives and individuals shall be addressed and shall be won for proceeding biddings and announcements of that kind together.

Donors / investors shall be encouraged for investments into such initiatives. This also particularly concerns “sustainable mid- and long term profit opportunities”.

Cities and communities shall be encouraged to look for appropriate plots for such initiatives and to offer those. Finally it’s all about continuing, rebuilding and newly building cities – particularly the Central European city as “cities for all humans – of any social and ethnic origin”.

Committed ecclesiastics – Rabbis, Imams and Priests shall be encouraged to make such steps approaching each other. Though initially there will be heated arguments afterwards also the majorities of their congregants will thank them.

Citizen’s initiatives and individuals shall be won as “supporters in the ideal and material sense” – regarding money and information („Spread the word“ – thus– „please share that information / that website!“)

In the final analysis it’s all about coming towards the end of the (self-) destructive “Clash of Civilizations”. Particularly in Europe – particularly in Germany with its history of the 20th century. And – that has nothing to do with “defenselessness” at all. Rather with looking ahead – and regarding thee debris of our younger past in a smarter way.

A “Europe of the regions” and the peoples living together there peacefully couldn’t evolve under the premise of the “Clash of Civilizations”. National egoisms and dictates soon ruled everything, which again and again got splintered and commanded anew.

The idea of common cultural roots throughout the different (building) epochs is obviously represented on the Euro-banknotes. Also the three monotheistic World religions feature these commonalities – not only regarding architectural style and decoration.

This doesn’t mean at all, that here an assimilation process running amok shall take place.

„Knowledge gained by experience” is an essential part of any culture. For arriving at a certain comprehension often a look – a gesture is sufficient. For living together, dwelling and working quite often in confined spaces the language and many other complex systems of “communication” are needed. And the (safe) spaces, which enable this exchange.

“Respect” therein always is the respect for the experience (of life) of the other one.

The “scrappy” – “fragmentary”, which is immanent to many processes and shapes in their development shouldn’t be lead to a continuing splintering. Our task should rather be to bring together the things – and the people.

That way we should be enabled to help ourselves and others and - meaningful labor – maybe even common happiness shall be given to us.

Besides that – facilities for meeting each other in public space – places, where humans are welcome and where they don’t hide in backyards – such meeting places – spaces for prayer and contemplation shall be open for everyone – believers of the three monotheistic World religions as much as believers of other persuasions – but also for confessing atheists – for anyone.

A democratic, pluralistic and in itself open society also demands respect for all purposes in life and ways of living or – ways of being in the world, as long as these do not restrict the other one in his or her personal rights – in his or her personal freedoms. Insofar spaces like that even increase public security.

Images: First preliminary drafts – (idea) sketches for “Abraham’s Caves” as an octagonal primary body with a Clock tower / Campanile / Minaret as a „Euro-Collage“. The structural elements from common history depicted on the Euro-banknotes from 5 to 500 Euros – openings and (bridge) structures here are laid over above and into the buildings.

Also a second variation as a longitudinal structure is represented in a ground plan and elevation sketch.

It’s here a question of pure “idea sketches” for no specified place, which are only intended for stimulating a discussion and – for openly musing about possibilities – other “future-proof” pathways than the recently struck beaten dirt tracks.