Afghan Kids - Their Future and Ours

An essay published in CHILD ART - spring 2017.
The magazine's title is "THE ROAD TO THE FUTURE - CREATIVE PATHWAYS".
My (Futurist) friend Sudhir Desai contributed to that as a guest editor and kindly asked me to write an article about Afghan children. But - not only my essay (on page 30 here) is worth reading. The whole magazine is a source of pragmative and creative thoughts - about - children - their future and ours. 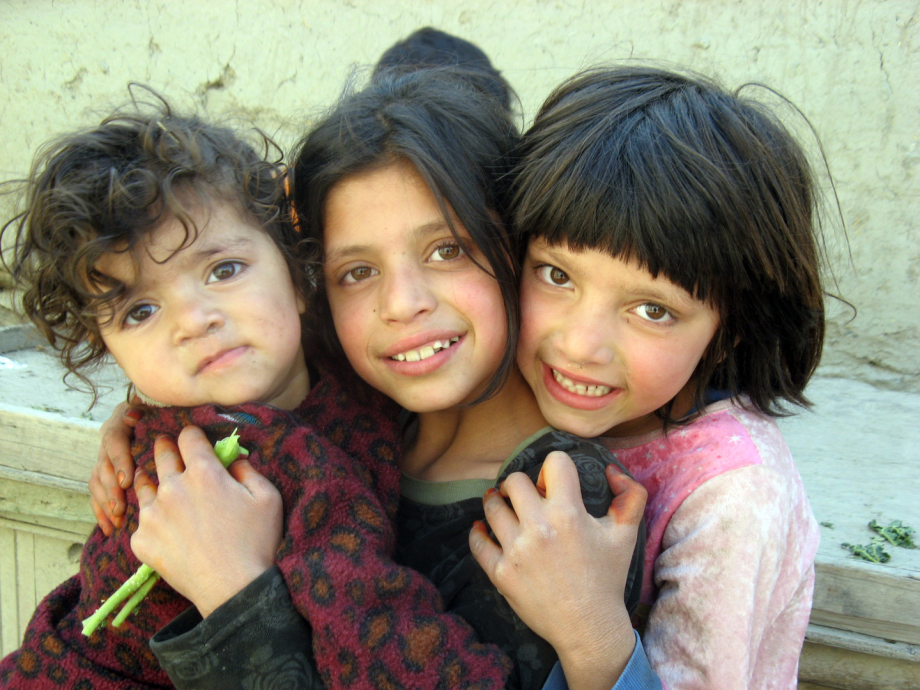 “Kids can paint – it just drives you crazy!” the young house painter Edgar Wibeau says in “The new Sorrows of Young W.” – an adaption of Goethe`s Werther by Ulrich Plenzdorf. A novel from East Germany’s 1970s.

One might add Goethe’s quote: “No human wants to become something – everyone already wants to be somebody” to that.

What kind of future do children paint – what hope and expectations – and fears do they express – by all means, they are still discovering? And what do we as grown-ups – also as parents project into them? What connects and – what differs children regarding different cultural and socio-economical backgrounds and different families?

What are kid’s dreams alike, when many elders – also many of their parents deeply believe, that sidewalks in Western cities are paved golden? Or – when their parents simply hate “Western things”, they feel somehow alienated to? Children like these three in the photo above from Murad Khane – part of the Afghan capital Kabul’s old town?

And – who cares about their dreams of warm and safe nests – places to feel hugged and loved not to turn into illusions – pink clouds shattering into millions of shambles when falling on the hard soil down to earth?

Reality mostly is much harder – much stronger in its impact on us than anything, we might have expected before. But – it’s also a challenge, asking anyone to find good and safe – “future-proof” solutions for difficult conditions on the ground.

Having read books about Afghanistan I believed, I was well prepared, when I came to work as a “rebuilding aide” to the Hindu Kush – more precisely to these three children`s neighborhood in the war-torn city of Kabul.

I wasn’t ready – we – “the West” isn’t ready at all to build up hopes of war torn places – of the weakest members of “splintered communities” - children and their fragile existence in a world of overloaded grown-ups – and parents. 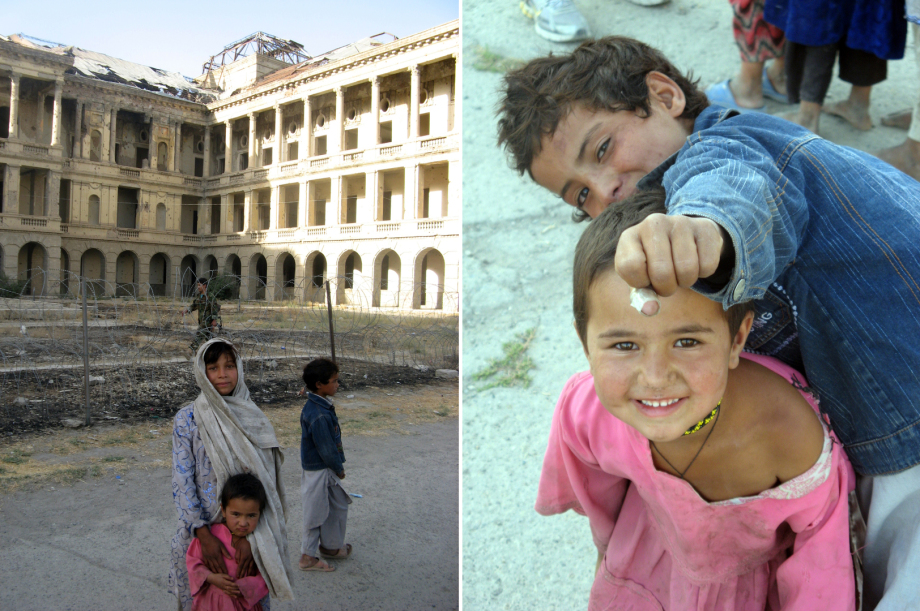 Street kids like these three here with the “Afghan Reichstag” at Kabul in their back –
what idea do they have about “freedom and democracy”?

The first Afghan House of parliament in their back was planned and built in the 1920s as King Amanullah’s “Darulaman Palace” by French and German architects and engineers and soon then abandoned and later again and again destroyed.

What might they expect from “education” – and “perspectives for building up a professional career”?

Once at lunch my Afghan colleagues were laughing about my bit astonished reaction, when they told me about their numbers of children. The chief engineer said: “It was the war. We needed to produce!”

The war went on – Afghanistan was at another turning point back then in 2009.

Many of my younger Afghan colleagues now have just two – at most three kids. Safety and security – and perspectives regarding quality of life and education also for the next generation automatically decrease the numbers of children. “Cannon fodder” - insecurity and lack of perspectives though increases that.

Places like Kabul are just extreme examples of cities, which cannot compete with the developments caused by war and rural exodus at all. The fastest growing town in Central Asia, these days home to 5-6 millions after now about 37 years of war and insecurity suffers more than many other places from a destroyed infrastructure and an increasingly harmful urban – to say it with LA based sociologist Mike Davis – “slum ecology”.

The policy following the Western invasion in 2001 aggravated much of that: private drilling of fountains and public water supply – thus – increase of consumption but no sustainable urban waste water management and lacking snow and rainfalls have caused a dramatic drop of the water table. Kabul river bed mostly is dry. Many inhabitants of the Afghan capital call it the “city’s biggest toilet”.

A dysfunctional waste removal system adds to that: plastic packaging clogs the surface drains. The stench of hydrogen sulfide caused by human waste in the city`s slums like Murad Khane mostly harms the tiniest and weakest ones – children and their mothers.

These are issues, most “Megacities” are facing – everywhere in the Southern hemisphere. But - it’s not that long ago, that we ourselves got out of these kinds of ecological disasters.

Air and water don’t know any national or territorial borders. We need to work together for tackling the “daily ecological catastrophes” of the South with the experience of the North and the West - safeguarding “healthy living conditions”.

Thus – children and their families can only thrive, when they are seen within their social and their urban or rural environment. As more than half of the Global human population these days is living in cities – mostly in their urban neighborhoods. 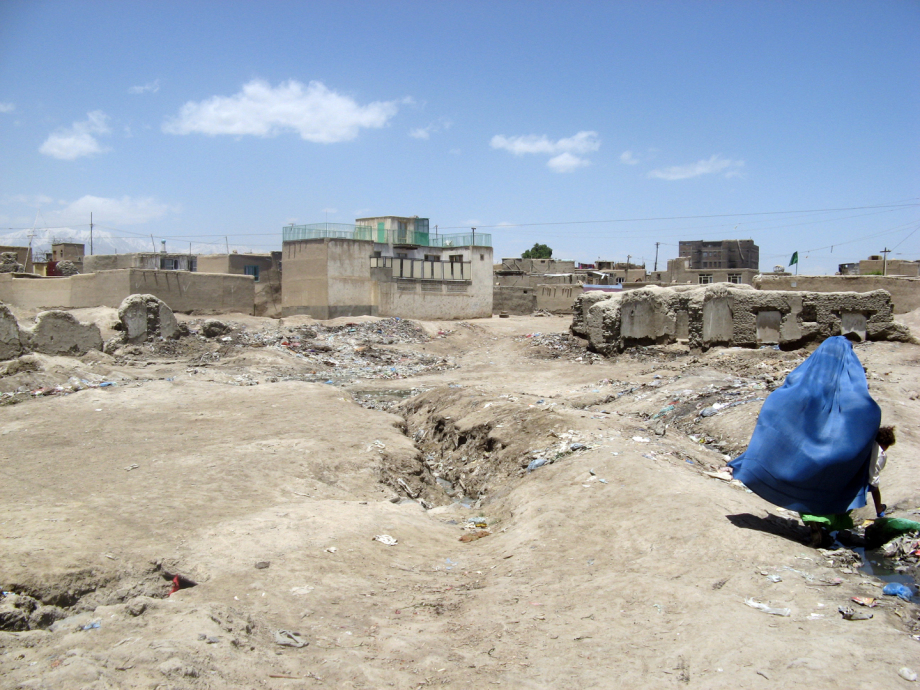 An “image of everyday perishability” after more than three decades of neglect, war and destruction might lead us closer to reasons. A generally “Maidan” named open space in the former densely built urban pattern of Kabul’s Old Town.

The city was primarily destroyed in the Civil War 1990 to 1992 – following the Soviet withdrawal in 1989. Fights kept going on until the Taliban takeover in 1996. “Warlords” or tribal leaders and seigneurs fought out grim battles and left the Old town with a degree of destruction of about 60 %.

The complete lack of concept of how to confront the “landlords” – potential “warlords” in spring 2009, when this photo was taken leaves us with the image of complete urban devastation. Humans here once more are left on their own resources. Like that child searching some protective shade against the glistening midday sun underneath its mom’s burka. Some protection against hostile elements, which before was provided by the traditionally densely built urban pattern of alleys and courtyard houses.

Only by legally balancing out “weak common neighborhood interests” against “strong private interests” these conflicts can be sorted out in a sustainable manner. Clean water and air are existential needs and to be made accessible for everyone. A “political will” for balancing these demands out is the key.

A US-officer, an “armed social worker” once asked me: “Why don’t work things out here the way, they worked out with you guys?” referring to Germany and its rebuilding process after WW2.

We looked at each other with a sigh – and I told him, what some Afghan friends had shared with me: During the Soviet occupation they found it rather easy to figure out, whether they could work with and trust an individual or not. Now more than 27 nations were talking about “democracy” and “freedom” and everybody seemed to understand something different about it. Afghans with their rituals of cheering each other and checking their counterpart and his or her mood and reliability that way find it harder then ever to find trustworthy partners for battling everyday life’s troubles in wartimes.

“My own project” there at Kabul offered for many – Westerners as much as Afghans a chance for “the West” for finally showing, that “we” were able to arrive at a concept for building up the war torn country there at the Hindu Kush.

Matching urgent needs of communities. For and with the people – and their kids. 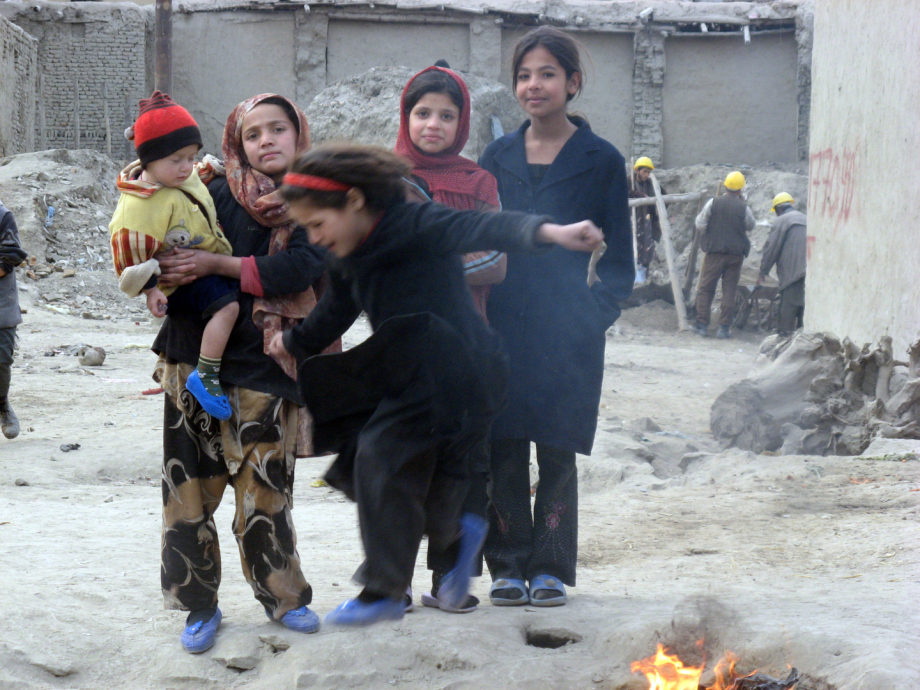 “Jumping over the fire” or – as we say it in German – “jumping over our own shadow” – you might translate that with something like “overcoming our fears” – “overcoming ourselves” – but also with “biting the bullet”.

Places like Afghanistan teach us a lot about ourselves.

And – children mirror our deepest fears.

People in Europe have noticed the shaking foundations – the cracks of insecurity and war also endangering the “Old continent’s” heart - and its soul.

The reactions are quite differently. Reaching from “right wing populism” to the empathy with Syrian refugees after the photo of a dead child on a Turkish beach – looking, as if he was asleep left a deep cut in our hearts.

Every perception is deeply fragmented.

But - it’s all about humans – about people.

“Climate change” as an increasing life threat is another matter. At highly fragile places like Afghanistan the impacts of local and regional weather and geological phenomena on everyday life are easily recognizable – if you’re ready to add one to one.

“The climate” is just a gigantic data pool of these local symptoms of the soil cracking away underneath our feet and the air suffocating us combined with historical and archeological and other observations.

The Western – our failure at places like Afghanistan should make us move towards recognizing the multiple layers of dangerous developments. We need to destroy to build. But – we shouldn’t start destruction without a proper plan – the will for rebuilding. That’s a crime against humanity.

As the future is just a small window of opportunity in the continuous stream of time between the past and the presence we owe that to our kids – also particularly to the children from Afghanistan.

These days with the “German refugee crisis” many people – also from Afghanistan are coming here. An urgent need for change has arrived in Central Europe.

We need perspectives for a life, that gives us – and them chances to become a promise – rather than a series of disappointments on a downhill slope. We need more community builders – less “willful executioners”. Legislation for protecting and saving people – not profits of banks and warlords.

The future of our societies shouldn’t only be shaped in “schools for government and administration”, but in “Schools for International and Inter-Cultural Development Collaboration”.

Then we could really make one step further towards the future as a promise.

Sawing grains of hope – for us and our children – and their Afghan comrades.

Stefan Frischauf is an architect and engineer living at Düsseldorf, Germany.

His work at Kabul 2009 / 10 - he calls it the “biggest professional and human challenge” of his life.

And – his most painful failure.

He’s the father of a 15 year old daughter and two sons of 6 and 2 years.
http://www.anyupae.com/english/book-2-fragment-fractal/