(below binding – cover and back side) is the forelast and in that genre most important book, I’m trying to publish these days. It combines architecture, urban development, environmental and social policy. I finished it in July 2015.

The term describes the fragmentary of current (urban and regional) planning in singular “case studies”. This fragmented character of “being and becoming of space in that time” might finally cause an increased splintering of cities – and their built and their immaterial structures – thus also their “social – their community spaces”. Simultaneously the term describes the tendency of rebuilding these fragments as “fractals” and that way putting them together again. That way it shall be possible to counteract the splintering – without falling into naïve “idyllic world- phantasmagoria” or other -isms.

Thus hard and target-oriented labor. But –

- as a US-sociologist - Richard Sennett describes the “good Craftsman’s work”. 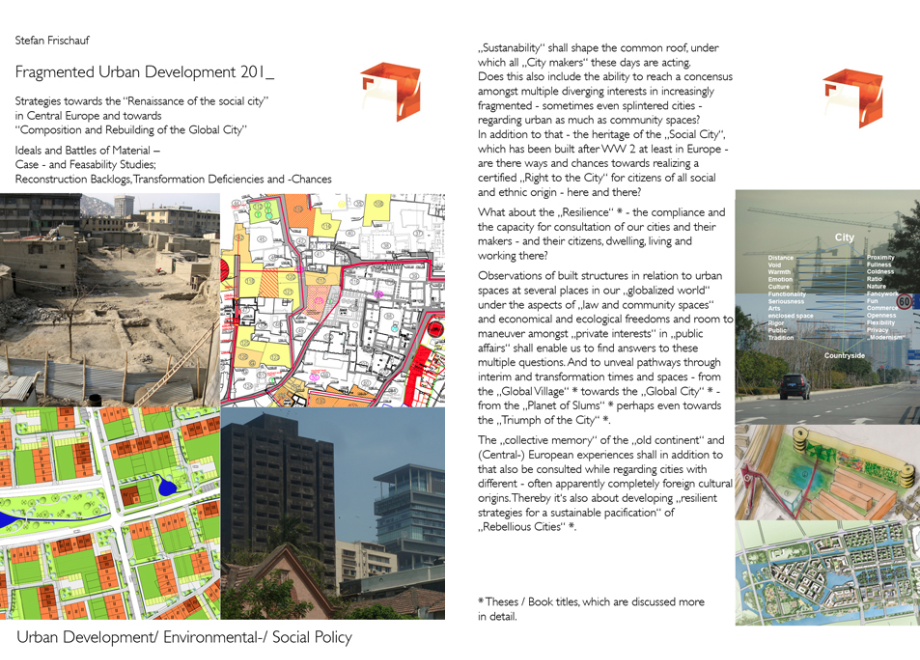 chapter 0.5  „THE POST-POSTMODERN HUMAN – Western understanding of democracy and architecture“ was already published completely in the blog of the architectural magazine BAUMEISTER in September 2014 (sadly without image underline) and in the print-edition of Baumeister B11 / 2014 in excerpts (just in German).

On the German site "Fragment - Fraktal: Buch 1" you find three online-brochures /
*.pdf-files with excerpts (just in German, as the translation couldn’t b done yet):

Below the table of contents, already translated into English as *.pdf-file.