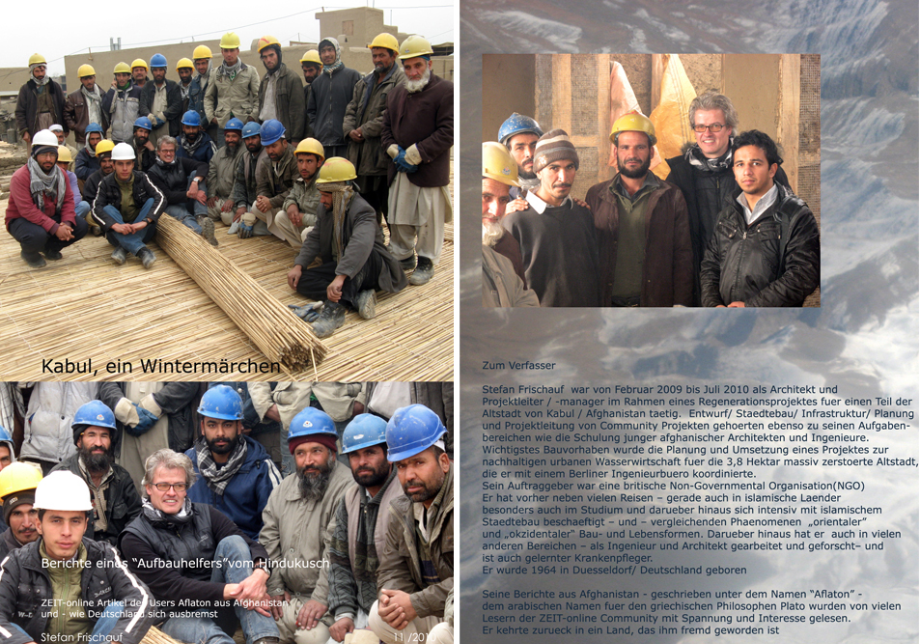 was finished in November 2010.

“Reports of a “rebuilding aide” from the Hindu Kush –

ZEIT-online Community articles of the user Aflaton from Afghanistan and –

how Germany thwarts itself” is written there in the subtitle.

The book title itself refers distinctively to the poetic cycle edited by Heinrich Heine in 1844:
“Germany, a Winter’s Fairy Tale “.

My username then, Aflaton is the Arabic name for the Greek philosopher Plato - in Farsi / Dari Aflatoon. The name hints to the fact, that without an intensive exchange amongst the three monotheistic Abrahamic World religions also at Al Andalus in Southern Spain and at Friedrich II.’s court – the „stupor mundi“ – the “world’s amazement” in Sicily - particularly at Palermo Renaissance and Enlightenment as essential phases of “Occidental development” – and in “western historiography” would not have been possible at all.

The Zeit-online Community was for quite long time one of the most liberal blog-communities in the internet in Germany – liberal in the sense of hard debates and good moderation. For some time the “community” also had a high reputation amongst profi-journalists of the ZEIT and then also had a counter for readers: the user Aflaton, who in 2009/ 10 blogged inside of the community from Afghanistan was mostly read by 600-700 readers. Quite a high quote when you imagine, that such blog communities are a bit hidden in the World Wide Web. And – many readers reassured me, that Aflaton’s articles contained the most authentic reports they got from the Hindu Kush.

“Rebuilding help (for helping oneself) at the place of origin” of refugees requires more than what we achieved at the Hindu Kush. As what now, in December 2015 is on the horizon at other places – in Syria, Iraq, in Libya and elsewhere. War and suffering aren’t “law of nature” – there are much deeper hardships behind it – many more meaningful (family) stories. A look at many wider pictures – listening to many narrations of war and suffering and hardship and misery, which keeps people’s dignity is a fundamental part of preparing “development collaboration” – of integration, which might then even soon become inclusion.

The return afterwards to the West – in that case – to Germany isn’t easy at all. You might easily involuntarily sense a certain alienation. And more.

In the final analysis these and other books helped me curating, what nowadays is called a “post-traumatic stress disorder (PTSD)”. Because of the fact, that I was working in a British-American “NGO” anyway nobody was in charge of or competent for me.

And – “my PTSD” neither resulted from the police bullet, which missed my skull tight on January 18th, 2010 – “friendly fire“ in the turmoil of a “smartly drafted assault” in Kabul’s center – nor from other assaults, I witnessed relatively close, but it simply resulted from the Western incapacity to really start a rebuilding process together with the sorely afflicted, warm hearted peoples from Afghanistan – preparing it with particularly looking at the rudimentary existential needs – property - land and water.

Here one of the articles – edited shortly after my arrival at Kabul in February 2009 – “Kabul, a a Winter’s Fairy Tale – after the attacks” and – here another one – “War and Population Growth” and here a third one: