What actually is behind many riddles, the name ANY U P A E initially causes and behind the programatic phrase underneath: "Any human can be a potential urban planner, architect and engineer!" you will get to know on the pages listed up in the column on the left here.

This start page here is reserved for current hints and topics etc.. 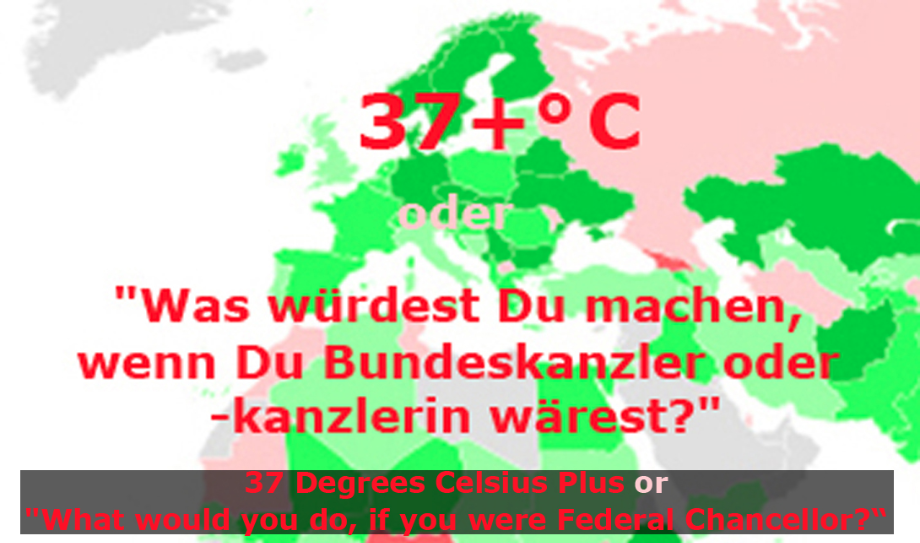 Theses for a
„New Social contract“ *

"What would you do, if you were Federal Chancellor?”

has been sent to several editors. Hopefully a small pocket book might get published soon.
The link towards the Crowd funding Campaign thereto – the key question for the constitutional sovereign –
the people of Germany – regarding the  "matter of power", which in the sense of the „extension of the architectural term and the definition of the city“  shall here be asked anew as a "matter of embodiment"
is to be found here.

body temperature – slightly feverish – shortly before the transition to fever.

37 Theses and four scenarios regarding the development of the state and the society in Germany, in Europe – in the world.

37 Theses and four possible scenarios, which then are put together to Four Corner Posts for Building a New European house”

37 Theses, four possible scenarios and four corner posts regarding essential subjects of our living together against the background of the “refugee crisis” and other dissonances and distortions and throw overs and the fragments of the just bygone “crisis”.

Or rather – chances and challenges?

One key question here shall be:

"What would you do, if you were Federal Chancellor?”

key question for the constitutional sovereign - the people.

Thus - moaning continuously and complaining on a high level – or taking concrete measures – collecting ideas and building up concepts for aiming at, what you really want to achieve?
And – trying to coordinate that here with a society of more than 80 million coaches of the German national football team and equivalently aligning that with their – with our needs?
(Maybe Joachim Löw really got the more complicated – at least the less controversial job than Angela Merkel?)

And of course – you will have to negotiate this program also in a continuous dialogue not only with our proximate European partners.

Thus – you have to place yourself somehow into the service of a community – your family, your neighborhood – your city – your country – your continent. And you will have to regard yourself as “a citizen of the world coming from Germany”. After all – head of government of one of the richest and most powerful countries not only in Europe.

In the middle of a world apparently drowning in chaos - a world with many diverse humans, whose overwhelming majority at the end of the day actually just wants to somehow live their lives in peace and safety – just as yourself, don’t you?

37 Theses for a New Social contract

will subsequently be confronted with

then are my proposal for arriving at an exit strategy from that dilemma  (P.59)

DemocraCy lives from movement – from change – and the courage to achieve that!
“Doing good labor means being curious, researching and learning from ambiguities” – says US-sociologist Richard Sennett.

WE want to move something in Germany – and in Europe!

For arriving at WE though WE need to make targets and perspectives explicable again also for our children.
Therefor competent and experienced citizens shall also be motivated here to apply for becoming “direct candidates” for the German Bundestag 2017 in one of the 299 electoral districts.

That way the “political field” of action shall be moved further.

“Nothing is as consistent as change”.

This should be particularly valid for a democracy and its possibilities to develop – to learn.

37+ Theses for a „New Social contract“ – including particularly the targets “Four corner posts for the construction of a new European house” shall open up discussions – and new horizons for a future for all, who want that amongst around 80 million German citizens – and soon then also amongst about 508 million EU citizens.

The ARCHITECTURE of a “new Europe” is structured in the sense of a “solidary Modernism” – based upon a “new deed of partnership”. This correlates with a European “New Deal“ – a contemporary interpretation of what US-president Franklin D. Roosevelt built up there in the 1930s.

Also former Greek finance minister Yanis Varoufakis hints towards that with his “modest proposal for sorting out the Euro crisis.”

Written by an architect – thus a “planner” – in addition to that a father of three children, who places himself in the middle of society, but emphasizes, that the heart beats rather left of that location.

The 37+ Theses are following here soon - further down on this side.

Climate research can be regarded as a gigantic data pool dealing with local weather phenomena.

City research as general topic shall collect and evaluate data from different angles regarding living, housing, working – community living of humans at many places in a similar way.

That way WE should quicker arrive at open planning processes – and an open development of society itself as much.

The city and its development
as living space of more than half of the human species -
between architecture and engineering sciences, sociology,
(macro-) economics and ecology, applied and economical geography, ethnology and justice – (cultural) history of humanity and the narrations of our ways of housing.

In short – City research, also looking for a dialogue
with climate research.

Because – what’s the use of man’s knowledge presumably growing that quickly, when mankind apparently can’t help themselves and we’re actually falling from one “crisis” to the next one?

When actually all the accumulated knowledge just coexists and cannot - or doesn’t want to be put together – let alone be evaluated or even then be applied?

Anything else but a children’s game, cause - things are complex. But – to say it with Albert Einstein – they should be addressed as simple as possible. But not more simple.